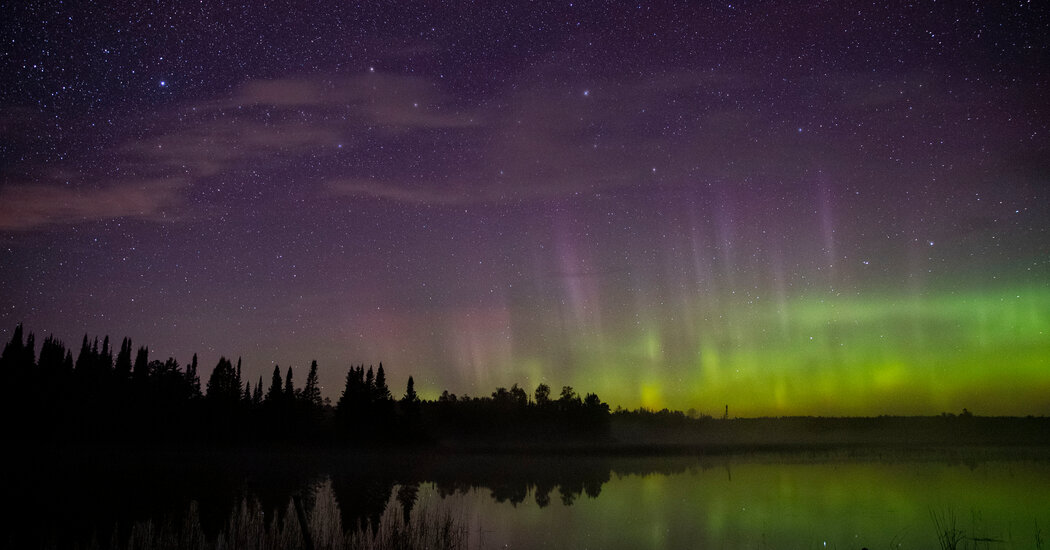 Magnetic energy had been building up in the sun this week like a rubber band twisted into a corkscrew. On Thursday morning, the rubber band snapped, and the pent-up energy was released as a solar flare, ejecting about a billion tons of plasma gas that could result in the dazzling display known as the northern lights once it reaches Earth this weekend.

But will it even be visible on Saturday night or early Sunday morning?

“If I was in the northern tier of the United States, then I would take a look in the sky,” Howard J. Singer, chief scientist at the Space Weather Prediction Center at the National Weather Service, said in an interview on Saturday.

The prediction center issued a geomagnetic storm watch on Friday that said the storm may drive the aurora borealis, the scientific name for the northern lights, over Washington State, the upper Midwest and the Northeast on Saturday. The storm was classified as a G3 on a scale from G1 to G5. It is not expected to cause technology disruptions, the center said.

“Typically when we get to that level, we will see northern lights in the northern tier states,” William Murtagh, the Space Weather Prediction Center’s program coordinator, said in an interview.

But there are unknowns associated with any magnetic storm, especially the exact timing of its arrival. The large expulsion of plasma from the sun, called a coronal mass ejection, is traveling in space at about one million to six million miles an hour. With Earth about 92 million miles away from the sun, the commute for the ejected particles is brief, sometimes as short as 15 hours or as long as four days, Dr. Murtagh said.

“This one is kind of on the fast side,” Mr. Murtagh said on Saturday. “We expect it sometime today, so it’ll be a little bit over a 50-hour transit.”

Since the ejected particles are so far away, however, scientists aren’t able to predict the exact timing. But if the particles arrive at Earth during the daytime, there won’t be a light show, experts said. The same holds true if one lives in a city with high light pollution or in an area experiencing cloudy weather.

But if it is nighttime, the skies are clear and there is low light pollution, then chances are good that people will see the aurora borealis, experts said.

The prediction center can give people about a 30-minute heads up before the lights are visible because its Deep Space Climate Observatory satellite detects the hurtling tons of particles while they are still between the sun and the Earth.

Mr. Murtagh said residents could monitor the center’s social media accounts and website for status updates throughout the night.

When the magnetic storm does reach Earth, the colorful curtains of purple and green — if they materialize — will be a result of the sun’s magnetic projectile interacting with the planet’s magnetic field, and “how it couples with Earth’s magnetic field will dictate how strong the storm is,” Mr. Murtagh said.

The stronger the storm, the more likely that areas in lower latitudes will see the northern lights, experts said. This weekend’s magnetic storm could appear in areas near cities such as New York, Chicago, Boise, Idaho, and Salem, Ore. The lights typically last several hours and could be visible through the entire night, Mr. Murtagh said.

In 1859, a solar superstorm caused northern lights that could be seen near tropical latitudes in places like Cuba and El Salvador. In 2011, the aurora borealis was seen as far south as Alabama.

Meteorologists across the country were already telling residents that they would not be able to see the lights or advising those traveling north to gaze up at the sky at night.

One resident in Des Moines was already prepared on Saturday afternoon to see the spectacle in the sky.

“I’m going to go to a dark sky area, north of the city, and then kind of just sit and wait it out,” Brennan Jontz, 28, who is a part of the Iowa Storm Chasing Network on Facebook, said in an interview. “Got to be patient; that’s the name of the game with the northern lights.”

He will bring a lawn chair, he said. He will drive toward the corn fields, away from the city lights, and turn on to a gravel road somewhere. Then he will sit down, take out his camera and wait to be illuminated again.