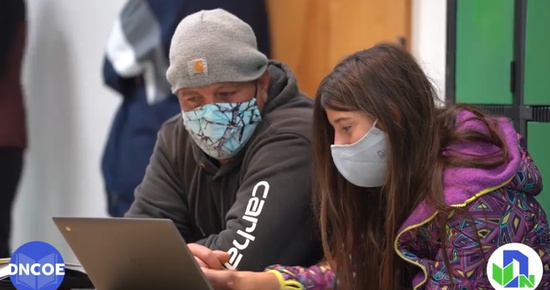 Though 200 6th-graders Received Chromebooks, Del Norte Unified Is Still Short On Devices For Its Students

Two-hundred sixth-graders received their own Chromebooks last week from an organization seeking to breach the digital divide.

But for many Del Norte students, that divide still exists due to a global shortage in devices starting at the raw material phase, according to Ryan Bahten, Del Norte Unified School District’s director of information network services.

DNUSD hadn’t had enough devices for each student going into the COVID-19 pandemic and began placing orders in the spring. This includes 800 Chromebooks Bahten said he ordered in June that were expected to arrive in August and never showed up.

“Unfortunately that August expectation has now been pushed to December, and that’s straight from HP,” Bahten told the Wild Rivers Outpost on Thursday, adding that the shortage in Hewlett Packard devices is global. “All that being said, what we’ve done is beg, borrow and stolen everything we can and that means everything.”

DNUSD students began school on Aug. 31, learning via Zoom, Google Classroom and other online learning management systems. The school district had planned on transitioning to Phase 2 on its four-stage “Continuum of Learning” model on Sept. 14 — bringing small groups of its most highest-need students back into the classroom.

However due to a lack of disinfecting supplies and personal protective equipment — due in part to the Slater Fire, according to DNUSD Superintendent Jeff Harris — that transition was pushed back to this Monday.

DNUSD’s Phase 3, or blended learning model, will kick in for kindergartners through 8th-graders on Oct. 5. In this phase, students will be brought back into the classroom in cohorts of 50 percent two full days a week and will be learning online the remaining three days

Parents can also have their student engage in online learning only regardless of which learning phase the district is in.

The high school is where the need for devices is greatest, Bahten said. Many students are using old Windows laptops that have been configured with licensing and third-party software to mirror Chromebooks, he said.

“We spent a little bit of money trying to make a system as effective as we can to send home (with students),” Bahten said. “Is it perfect? Nobody’s going to say it is, but we try to fill in the holes as quickly as we can.”

At the elementary school level families that can are making do with what they have at school, enabling the district to reallocate devices from its K-8 schools to Del Norte High School, Bahten said.

“We’re still short a few hundred — there’s no way around that,” he said. “I’ve basically put out all my feelers, talked to all possible vendors, even ones I haven’t historically used.”

Office Depot is one of those vendors. A partner with the California Department of Education, the office supply retailer is hoping to make 50,000 11.6-inch HP Chromebooks available for delivery at the end of September, according to the CDE’s overview of available purchase programs.

Bahten said he’s placed an order with Office Depot and was told devices may arrive in Del Norte County as soon as October.

Bahten has also ordered more iPads, which are used in the transitional kindergarten, kindergarten, first- and second-grade classes. He’s hopes they’ll arrive in late September or early October as well.

Last week, every sixth-grader at Crescent Elk Middle School received a Chromebook courtesy of the California Emerging Technology Fund, a non-profit corporation created when the California Public Utilities Commission approved the mergers of SBC-AT&T and Verizon-MCI in 2009. As a result of that merger, the companies were required to contribute $60 million over five years to give underserved communities better access to broadband.

The Device Distribution Project is part of a memorandum of understanding Frontier Communications entered into with the CETF when it purchased the wireline network from Verizon.

This year, Del Norte County was one of 17 in California to receive CEFT dollars, which supports technology for middle and high school students within Frontier Communications’ coverage area.

Parents and families also received training on digital literacy as well, according to a Sept. 11 DNUSD news release.

In a video address to the community, Harris said a number of students and families in the area aren’t able to access Internet.That challenge is exacerbated by the COVID-19 pandemic, he said.

“The digital divide is a national issue and it’s often the case that the issues that plague our nation are issues that are further magnified in small rural communities like ours,” Harris said, thanking Frontier Communications and the CETF. “In Del Norte, our students are often the last in line for support and relief when compared to the rest of California.”

On Thursday, Harris told the DNUSD Board of Trustees that the district was still “a little short on devices.”

Though the “broadband gap” in Del Norte County has been discussed for decades, COVID-19 has brought that challenge to the forefront. The district is looking to distribute nearly 4,000 devices to its students, but breaching that gap is more difficult to solve, Bahten said.

The school district has spent grant money to bring more reliable internet to the schools in outlying communities, such as Margaret Keating Elementary School in Klamath. But, he noted, that doesn’t help families access Internet at home.

Families in remote areas of the county, such as Low Divide Road, deal with spotty Internet, but so do those living living in Smith River, Bahten said. For some families, Internet access is simply unaffordable, he said.

“I hesitate to say this, but unfortunately I’ve had a lot of tears this year, even myself, with families,” Bahten said. “They want nothing more than to make sure their child gets the best education as possible and we want the same thing.”

As part of the Chromebook distribution at Crescent Elk, families could sign up for Frontier Fundamental Internet, a $19.99-a-month service, according to DNUSD’s news release

Meanwhile, in the three weeks since school started, Bahten said he and his team of five IT technicians have been fielding more than 100 calls for technology-related help each day. In the first two days of school, DNUSD’s IT staff have received 700 calls, he said.

Despite the challenges, Bahten said, families, students and staff are understanding and flexible.

As parents of the district’s highest needs students prepare to send their youngsters back to campus on Monday, Bahten reminds them to bring their devices with them and to make sure they’re charged.

Up until COVID-19, the district’s devices would be in charging carts when students weren’t using them, Bahten said. However, the district’s unable to provide enough extension cords for everyone in the classroom to charge their devices at the same time.

“This is a crucial piece of education,” he said. “So, you need to bring it with you as you would bring your book in your book bag.”