My approach to exercise is pathetic, but probably pretty normal; I tend to go through two week phases where I get obsessed with working out and I think it’s finally clicked for me. I believe wholeheartedly that I’m going to become one of those gym people, but all too quickly I fall off the wagon and I don’t darken the doorway of a gym for a solid two months.

I don’t think I’m alone in this habit, so several months ago (pre-lockdown) I decided to see if a yo-yo-exerciser could be changed into a regular exerciser once and for all.

The idea was to follow an eight week programme to kickstart the habit. The thinking was to replicate the two month ‘transformation’ packages you’ve probably seen cropping up at gyms across the country over the past year or so. I need structure and something strict to follow, otherwise I’ll instantly go off the boil with a crate of Stella and a white Magnum, so while following something so rigid and intensive isn’t feasible for the long term, it seemed like a good way to build the habit.

The biggest thing for me, as with a lot of people, wasn’t so much about changing my body, but rather my mindset. I really wanted to start something that would actually stick.

I would be doing three exercise classes per week at fitness studio Digme (which offers spin, hiit and yoga classes), plus two personal training sessions per week and following a diet plan with specific macros (the number of grams of protein, carbs and fat you should hit per day).

It’s very very important to note that this meant cutting down on alcohol as much as possible, which was tough for me because pubs are my favourite place to go other than the TK Maxx home section.

My daily macros were as follows:

Aside from cutting back on alcohol my diet plan depended on whether I was working out that day or not.

For a day in the gym I should eat:

For rest days I had to drop one snack or shake. Quite quickly, I realised I was absolutely not going to go hungry…

I started by keeping a food diary for the week before I started my fitness journey, just to see where I could improve. It became apparent really quickly that when I hadn’t prepped for the day with my own snacks, I could easily smash through half a Colin cake, no problem. So the fact that this diet plan never lets you go hungry, means that you’re never caught short.

I was very optimistic, but also very overwhelmed; I wanted to learn a bit about food and nutrition as I went along, so that meals could still be tasty and I would be able to prep food without constantly having to refer back to books or google, but it’s a lot to take in.

I started by tracking my food, so that I knew I was hitting my macros. I am generally cautious of calorie tracking apps because I think they can get obsessive, but I only planned to do this for the first two weeks.

I also went to meet my personal trainer Richard Hart, for our first session. I was really pleasantly surprised to hear that even though he was clearly in great shape, he had been out the night before. So a sustainable life of fitness and normality is definitely possible. He told me he eats well, exercises regularly, but he also lives his life. You have to do something you can maintain as a lifestyle otherwise you’ll be back to square one. And it’s nice to hear that from someone with biceps the size of my face.

Next up I headed to my first workout, which was a hiit class at Digme. These 45-minute classes involve alternating between various weighted or bodyweight exercises and different boxing combinations on the boxing bags. I can’t stress how much I struggled in this class. I’ve never sweated so much, never wanted to bail on a class more, but unusually, I felt comfortable and not a bit self-conscious like I normally do. Something about making the commitment to do the 8 weeks without fail stopped my mind from looking for excuses to get out of it.

That week I did two hiits, one spin class and had my first personal training session, and after a week of more intensive exercise and better eating that I’ve ever done in my life I felt good. In my head, anyway. My body ached everywhere, I could barely move. Plus I was desperate for sugar and a pint, and I was disappointed to discover that I didn’t look like a Hadid yet. How’s that fair?

Here’s an example of what I ate in a day: 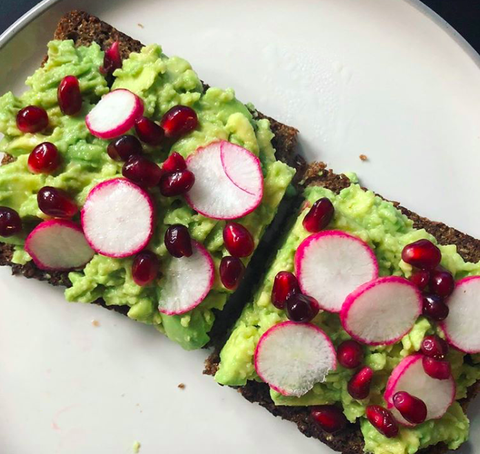 Coming into week three was scary. This is usually the point where I’d give up, so I was nervous that I’d find a way to sabotage all of this somehow. To try and combat this I booked fitness classes for as early in the morning as I possibly could; that way my brain wouldn’t have time to think up an excuse for not going. The early bird gets the boob sweat. That was the learning for this part of the process. 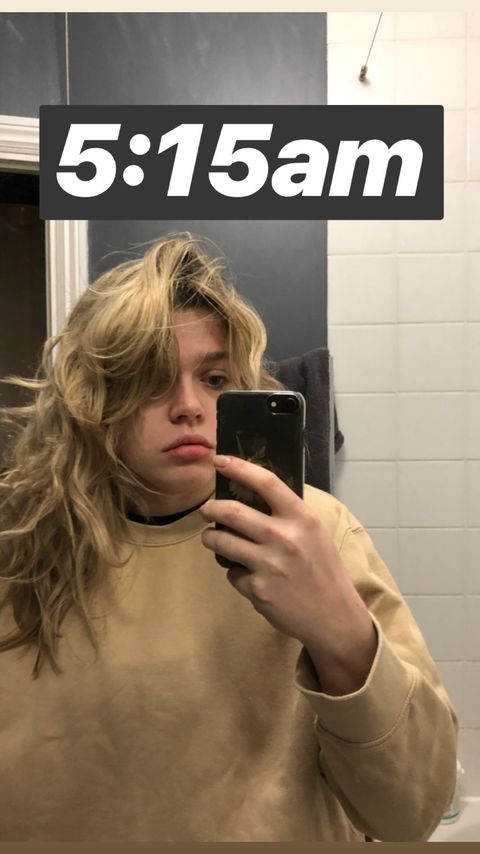 Week 4 got even tougher. I was proud that I’d been going to the gym more consistently than I ever have in my life, but these middle weeks were tough. The motivation had run out and the finish line was still a far way off. It’s hard to drag yourself to the gym when you’re aching, headachey and tired.

Here’s were scheduling became vital. I found it helped to put gym sessions in my calendar, that way it was like a meeting I couldn’t bail on. Again, with my meals, I worked out a system where I would make breakfast and lunch for the following day as soon as I’d got home and got my trackies on, but before I’d settled in for a night of Queer Eye. I was working hard to make it routine and not obligation.

Here’s an example of what I ate in a day: 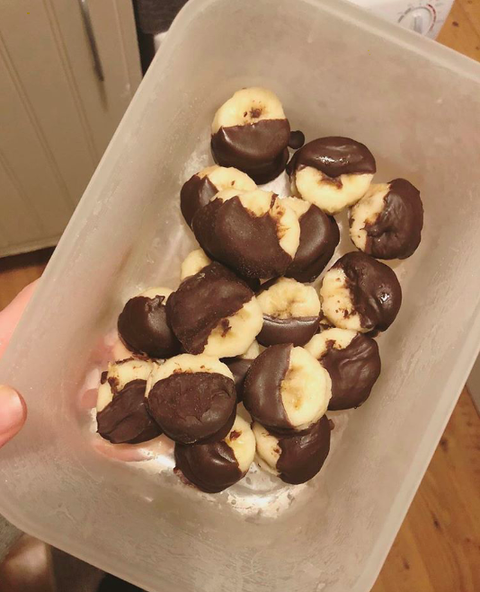 Okay, so this is when my jeans started to fit better. Before this week it had actually been quite painful to sit down in any of my jeans. It always made me feel bloated and too full, with the waistband cutting into my body like my clothes were garotting my internal organs. At this point I had stopped feeling them on my body anymore, which was an odd lack of sensation.

But despite the denim revelation it was getting harder to stay focussed. It was the run up to Christmas so the office snack table was full of doughnuts and assorted booze. You can definitely do this and still have the odd treat, but I know myself well enough to know that the slightest lick of chocolate and I turn into the shark from Finding Nemo; my eyes roll over black and I rampage. Balance is something I will get to, but for now, abstinence is best.

Having said all that, it was in these weeks that I started to feel differently. Nothing major, I wasn’t hench AF yet, but I felt stronger and better in myself. The brain fog that came from cutting back on sugar was clearing up and I had more energy. It felt like my body was starting to like what I was doing to it, rather than screaming at me for it.

I hadn’t planned to do this over Christmas, because… well, what a terrible idea, right? But that’s how the protein cookie crumbles. Rather than complaining, I decided it was quite a good baptism of fire; if I could maintain something vaguely like the plan during Christmas when I should have been mainlining Baileys and eating 6-7 bags of chocolate per meal, then I could do this anytime.

I learned that the best approach was picking your battles. For example, I’m categorically not forgoing Christmas dinner, I’m just not. Neither am I going to turn away chocolate coins on Christmas Eve. So, I ate them. I ate them all. But I made sure that I ate more healthily on the meals that didn’t matter as much. 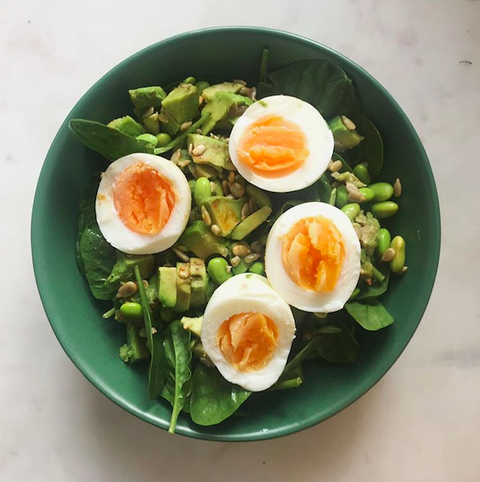 Plus, I made sure I always worked out early to got it out the way so that I had the whole day ahead of me without having to think about it. Frankly, it’s a good way to work off the previous night’s family tension.

By week eight I was really sad to be finishing. It’s not sustainable to live like this forever – at least not for me – but seeing how sad I was to finish the eight weeks made me realise how much I’d enjoyed it.

I definitely didn’t follow the meal plan to the letter, but I kept to the main principles as much as possible. It was only eight weeks but I love food, I really love it, and if someone offers me a bowl of gnocchi bolognese I’m going to eat it. The nice thing is that, long-term, I would never be as strict with myself as I was with the 8-week meal plan, so gnocchi is still a goer. I also only managed to cut out booze for 16 days, and I made a huge fuss about it. But even after I started drinking again I cut back a lot, which definitely made me notice a difference in how I felt; less groggy and more energetic.

I have taken so much away from learning a bit of basic nutrition. It informs my choices and helps me eat better, even if I’m not eating healthy food 100% of the time. Which I most definitely am not. 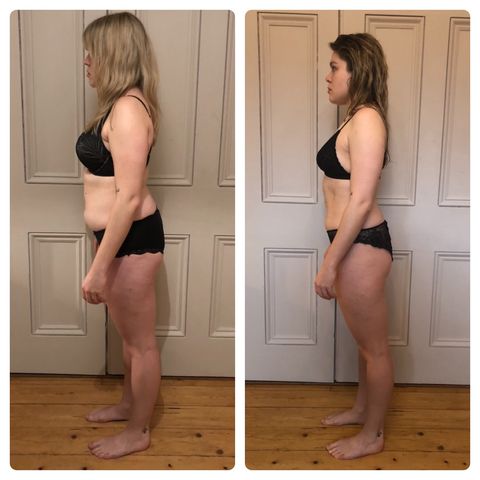 I couldn’t believe the change in the before and after pictures. Of course, I still look like me – it’s only eight weeks, but I couldn’t believe how much I had changed in that time and how much stronger and better I felt. Sadly, I can’t show you the front-on pictures because after looking at them again I realised my pants were a bit see-through with the flash on. And I don’t like my job that much.

The workouts were my main takeaway. Endorphins are as glorious as you’ve heard they are, and not to sound like an awful motivational speaker but you will genuinely never regret a work-out. I stopped thinking about my body for how it looked and instead started thinking of it for how strong it was and for all the stuff it could do.

I started out dreading these eight weeks, but when I came to the end I realised there was so much about it I didn’t want to give up. Finally, it felt more normal to work out and look after myself than to not.

Cosmopolitan UK is available for purchase online and via Readly. You can also SUBSCRIBE HERE or read on Apple News+. Find our podcast ‘All The Way With…’ on Spotify, Apple Podcasts and the Acast app.

This content is created and maintained by a third party, and imported onto this page to help users provide their email addresses. You may be able to find more information about this and similar content at piano.io