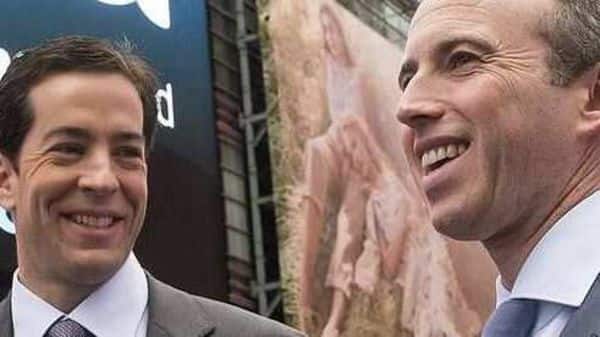 A lesser-known beneficiary is Okta Inc., a decade-old cloud computing company based in San Francisco. Its software gives corporate customers a kind of border control for the internet, helping them authenticate the identity of their employees and customers as they connect remotely to a sprawling system of online applications.

The Covid-19 outbreak, which has cast most workers out from behind their corporate firewalls and into their home offices, has helped to further popularize Okta’s software. It allows companies to seamlessly manage their employees’ use of the internet and to protect the corporate data on their devices.

The stock has more than doubled since March, when lockdowns began, and has surged more than 10-fold since its initial public offering in 2017. The software maker has become an integral part of our new daily life, with its technology used by organizations as varied as Major League Baseball, Adobe Inc., FedEx Corp. and Seton Hall University. The boom has some investors betting that Okta and similar companies will accelerate their revenue through the crisis, even as it raises questions for executives about their good fortune at a time of suffering and massive job losses in the nation at large.

“It can be mentally and psychologically confusing for me to both read the news and then see customers asking for our service,” said Frederic Kerrest, Okta’s co-founder and chief operating officer. “Because the world is not in a good place, but, you know, we seem to be able to provide some solutions that people really need, which is great.”

From March through July, Okta’s main product, called Identity Cloud, was used almost 16 billion times to access an app or website. The multi-factor authentication service saw usage nearly triple in the period compared with a year earlier, and it hit a single-day peak of 145 million unique logins, the company said.

Wall Street has bought into the story. The stock has soared 106% since March 12 when U.S. President Donald Trump imposed travel restrictions on Europeans. Now Okta must live up to the lofty expectations that come with a company valued at $27 billion. The shares slipped late Thursday after quarterly results reminded Wall Street that the company may not be able to accelerate sales growth forever.

“We’re still being prudent about the rest of the year and the macroeconomic consequences ahead of us,” Chief Executive Officer Todd McKinnon said in an interview. “Headwinds to the business will be a little stronger in the second half.”

The company has also lost money for most of its existence. However, investors are often willing to look far into the future when assessing cloud-based subscription businesses such as Okta. These companies spend heavily on sales and marketing to win as many customers as quickly as possible. Once the user base is large enough, distributing extra versions of the software online costs very little, and a highly profitable business can emerge — one example being Salesforce.com Inc.

Okta must lure as many paying customers as it can during this rare work-from-home boom, and then keep hold of them as the world slowly returns to some semblance of normalcy. Its work with FedEx suggests that this is possible.

The logistics giant first partnered with Okta about a year ago, and now has more than 85,000 workers using the software maker’s service to access the FedEx virtual private network. Warehouse employees were given additional iPads to access apps with Okta, so they didn’t have to share devices and could maintain social-distancing rules, said Gene Sun, FedEx’s chief information security officer. Many of the company’s customer-service workers have Okta on their phones for the first time in order to securely pull up customer information while working remotely.

Sun said the company greatly reduced its legacy sign-on system the week of March 16 in favor of Okta.

“Okta really has enabled us to prepare the workforce to work from home in the March timeframe in a really smooth manner,” he said. “The thing about the backdrop of this pandemic is we have come to a conclusion that we should try to be moving aggressively toward using cloud services providers,” whose subscription payment plans help FedEx manage user prices.

Like companies with workers at home, educational institutions have needed to figure out how to teach pupils remotely. Seton Hall University, a private Catholic school in South Orange, New Jersey, had a leg up because students and faculty had been using Okta since 2013. The college went from offering a few hundred online courses in the spring semester to providing more than 2,000 virtual classes in a few days, through Blackboard, which students access via Okta. The university also has an online portal named for its mascot, PirateNet, that is the information hub for its community, used for everything from paying tuition bills to registering for classes.

“Really behind the scenes PirateNet is hundreds of apps inside Okta,” said Paul Fisher, an associate chief information officer of Seton Hall.

When the coronavirus began to spread in March, Okta was among the first U.S. companies to publicly grapple with how to work around the pandemic. The company was scheduled to host a splashy San Francisco conference for customers, partners and analysts — a software-industry ritual to strengthen future sales and telegraph the company’s strategic direction.

McKinnon, the CEO, had to decide whether to cancel the event, delay until some unknown date or take it online. He opted for a remote conference, appearing from his home, and filmed a sketch in which he said his family promised not to interrupt him. His son walked into the frame anyway.

The playful tone was a professional departure for McKinnon, a 6-foot-2-inch tall bodybuilder and a former CrossFit athlete. Pat Grady, a venture capitalist at Sequoia who invested in Okta and remains on its board, said that in an industry full of CEOs who use lofty language to explain how their apps are changing the world, McKinnon presents his company’s mission in a just-the-facts way that has gained him credibility, and a little criticism.

Okta’s successful navigation of the pandemic has paid off for its co-founder. During these last five months, McKinnon, 48, has become a billionaire on paper. Bloomberg estimates his net worth has climbed to about $1.7 billion from about $900 million at the start of the year. Through a spokesman, McKinnon declined to verify his net worth.

In 2016, McKinnon said Okta would give 1% of its equity to nonprofit organizations in its community. In the aftermath of the May killing of George Floyd, McKinnon and Kerrest pledged more than $1 million each for racial justice issues and said they will match employee contributions to civil-rights organizations. McKinnon and his wife also said they would provide $500,000 for Covid-19 relief efforts.

Despite persistent rumors Okta may sell itself to a larger tech company, McKinnon’s long-term plan is to grow the business he co-founded into one of the world’s largest software makers. He says big challenges motivate him to work harder. Years from now, after the Covid-19 virus has been defeated, he expects his slice of the software market will only grow more essential.

“We’re technology believers,” McKinnon said. “We think it’s not perfect. We think that there’s a lot of work we can do to make it better, easier to use more secure, more helpful for users. But that’s what’s exciting about we’re trying to do. It’s an almost boundless thing.”

* Thank you for subscribing to our newsletter.