Two candidates running for Bangor City Council, Dina Yacoubagha and Kim Boucher, are new to electoral politics, but both have years of experience in community organizing.

Their grassroots backgrounds have helped them to view the most pressing issues facing Bangor, including inadequate housing, poor public transportation, entrenched poverty and the devastating effects of substance use on families, through a structural lens.

It’s a perspective they say is crucial to building a just, inclusive local economy.

“I’ve listened to the unmet needs of many people and the challenges that they face, including poverty, lack of housing, lack of access to childcare, job opportunities, racism — you name it,” Yacoubagha said. “We can’t talk about one of these issues without talking about the others.”

Boucher said, “If the city can’t support everyone in the community to thrive, including the most vulnerable members of this community, then there’s not going to be a market for new businesses to come into the city.”

Yacoubagha and Boucher are running in an 11-person race for three open seats on the Bangor City Council. Both women graduated earlier this year from Emerge Maine, an organization that prepares women to run for local office. Council Chair Clare Davitt, a 2017 alumna of Emerge, is also running for re-election. 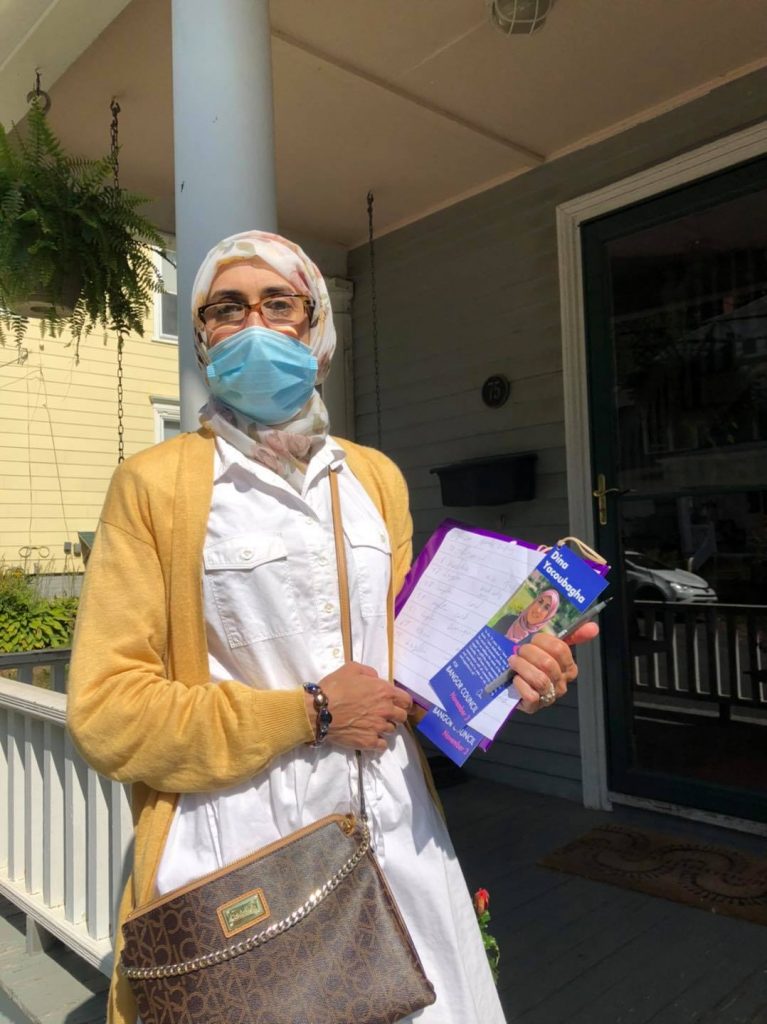 A champion for the underserved

Yocoubagha is a Syrian native who came to the U.S. 22 years ago with her husband, a physician. With their two children, the couple moved to Dover-Foxcroft 14 years ago to meet her husband’s visa requirement to work in an under-served community. A few years later, they relocated to Bangor — but they weren’t anticipating settling down.

“I was like, ‘Three years and I’m out,’” Yocoubagha said. “I thought we’d like to live in a bigger city. But once you put your heart into this place, it gives you a lot.”

Yocoubagha began volunteering with Food AND Medicine in Brewer, a non-profit she was drawn to invest more and more of her free time into because of their goal of organizing low-income people to address the root causes of poverty. Finding a community dedicated to tackling the issue at the systemic level inspired her to switch from pursuing a master’s and doctorate in linguistics to a Master of Social Work degree from the University of Maine.

“We can’t achieve economic development, we can’t address poverty, if we don’t address racial equity in our community. We can’t talk about homelessness without talking about mental health issues and substance use issues,” she said. “They are intertwined.”

Yocoubagha is a board member of the Maine Immigrants’ Rights Coalition, which advocates for improving the legal, social and economic conditions of immigrants in the state.

She wants the city government to expand public transportation access, fund new affordable housing and raise the minimum wage in Bangor above the state rate of $12 an hour.

Yocoubagha also plans to champion policies that center unhoused residents, people battling substance use disorder and those who are formerly incarcerated. She supports harm-reduction policies such as clean needle exchanges, overdose prevention sites and recovery facilities that allow women to stay with their children. She also supports job training for residents returning from prison.

“I learned the needs of my community through my volunteering experience, listening to people. That’s how I would approach being an elected official, actively listening to people talk about their unmet needs,” she said. “I feel like I really can be like an agent of change from that position.”

‘Each choice matters when it comes to making systemic change’

Like Yocoubagha, Boucher also found in Bangor a community where she wanted to sprout roots. Originally from Massachusetts, Boucher went to college in Maine before traveling to West Africa with the Peace Corps and later teaching in underserved U.S. schools with AmeriCorps. She returned two years ago and now works in philanthropic fundraising for Northern Light Health in Bangor.

“Growing up in the families that I did, community service was just kind of the water in which we swam. My parents were like a lot of people behind the scenes in a lot of civic life, putting on forums, supporting candidates. But I never thought of running for office,” she said. “I think kind of finding a place that felt like home, that made me really think, ‘Okay, now that I found a place where I want to spend the rest of my life, how do I help this place become the best place for my kids to grow up?’”

Like many towns in Maine with an aging population, she’s found local politics in Bangor focused on drawing in outside investment to keep younger residents from leaving town.

To entice young people to stay, Boucher says the community needs to be strengthened from the bottom-up.

“Supporting small businesses in Bangor — everybody says that they will do that. What does that actually mean?” she asked. “I think that part of what supporting small businesses means is that we are investing in our neighborhoods and our most vulnerable populations. We need a community that is welcoming to all to be able to then bring in folks that will continue to make this community stronger.”

Boucher supports raising the minimum wage in Bangor, as well as making use of the city’s aging, but more than ample, housing stock to create affordable housing to address homelessness in the city.

“Bangor, in a lot of ways is sort of the doorway to the north. We are sort of the last bastion for a lot of the social services that people need,” she said. “I think that’s why people find themselves here frequently when they may have nowhere else to turn.”

“There’s 1,600 vacant housing units in Bangor. There’s 1,200 individuals who are experiencing homelessness each year. That is a huge disconnect,” she continued. “Rather than just saying, ‘Here’s a voucher to stay at a hotel,’ it needs to be an investment in what we do have.”

Boucher said that while municipalities have fewer resources than state and federal governments to address the systemic failings of the economy, it is still important for local officials to act with an eye towards the bigger picture.

“You know, each choice matters when it comes to making systemic change,” she said. “I know I am not going to solve the opioid crisis. It’s not something that is within my power, but I can, as I make day-to-day choices on the council, have those voices and those stories be in the forefront.”

Boucher added, “Unless you’re consciously thinking about how each choice impacts those who are not like you, then you’re just going to kind of perpetuate a system as the status quo.”