Dallas, GA – Paulding resident, veteran corporate speaker, and entertainer Joe M. Turner doesn’t often go six months without boarding a plane. But in 2020, the global pandemic led him to add an entirely new kind of magical performance to his work. And thanks to technology, it has taken him around the world all year.
“In February I was performing magic on a cruise ship in the South China Sea,” said Turner. “After departing from Guam, the pandemic spread and every port we were scheduled to visit closed. After nearly two weeks at sea with no stops, we finally landed in Singapore and I flew home. I spoke at a conference and did a couple of other corporate events, but by mid-March, my entire 2020 calendar was emptied by the virus.”
Rather than stay paralyzed, Turner took quick action. “I attended my first couple of Zoom meetings and realized immediately that there was an opportunity to develop a unique kind of interactive theatre in that space. My constant goal through the whole crisis has been to keep finding ways to be creative and productive, so I decided to create and produce a virtual magic and mentalism show.”
On April 3 Turner launched his first virtual magic and mentalism show, which he produced in his home office north of Dallas. And then something unexpected happened.
“A couple of weeks later I received an email from a New York Times arts reporter asking to see my show for a story on how magicians across America were using technology to perform,” said Turner. The reporter covered a dozen virtual shows across the country, and Turner was included with a spotlight on how hospitable he was to his audience. He thought that was the end of it, but there was more to come.
“Two weeks later I was having coffee one Sunday morning when a friend in Manhattan messaged me to congratulate me for being in the Times,” Turner recalls. “I thought she was mistaken because the story was already old news. But I had gotten an additional mention – a recommendation of my show in the Sunday Times!” Turner’s virtual show was the only one the Times had recommended. “None of this would have happened if I hadn’t been one of the very first in the country to develop an online performance.” His online show has led to multiple performances and lectures, including a recent international virtual show where he represented the United States alongside acts from the UK, Malta, Norway, Canada, and Brazil for a global audience.
The show, live-streamed from Dallas, has been viewed all over North America and Europe and it continues with monthly performances. You can enjoy “Remotely Entertaining” on Sunday, September 27 at 7 pm, or Sunday, October 18 at 7 pm. Tickets for the one-hour interactive Zoom show are available at turnermagic.com/tickets. Only one $25 ticket is needed per household, but Paulding County residents can use the promo code “Paulding” to save 20%. The show is designed for adults, but suitable for families to enjoy together. 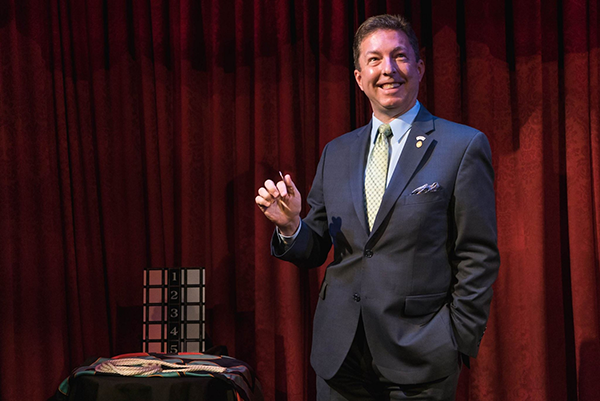