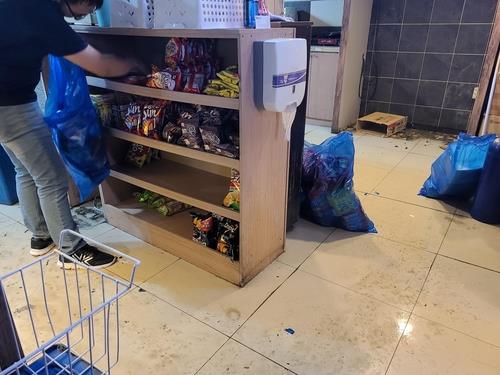 At a branch of a coffeehouse chain in Noryangjin, southwest of Seoul, tables were occupied on Monday morning with patrons — most of them students attending hagwon, or cram schools, in the neighborhood.

Half of the tables and chairs were stacked away in a corner of the cafe in order to maintain social distancing. People sat while keeping a distance from each other.

“I moved to this neighborhood to go to a hagwon, but it is still closed and it’s been really hard to find a place to study,” said one patron, who asked not to be named. “Since it reopened today, I came here to study.”

On Sunday, the government relaxed social distancing regulations in the face of growing concerns over economic devastation from antivirus restrictions and a slowdown in new outbreaks.

At the entrance of a study cafe in Mokdong, western Seoul, a thermometer and an entry log were placed on a table. Only five seats were occupied among the total of 70.

“I’ve sent out a text message about the reopening, but still there aren’t many customers,” the owner said. “I feel relieved that I can open the business again after two weeks. The business has been really bad. I hope there are no more (forced) closures.”

In Daechi-dong in southern Seoul, home to more than a thousand cram schools, many hagwon still remained closed.

“I am happy that the study rooms (partitioned private study spaces) are finally open,” said a high school freshman who was heading to one to attend a remote class provided by a cram school.

A 52-year-old parent, surnamed Joo, from the southeastern ward of Songpa said he was relieved that study rooms and cram schools opened again.

His entire family had stayed at home for the last two weeks, he said. He worked from home; his oldest, university student son took online classes; and his youngest child, who is due to take a university entrance exam in December, also had to study at home.

“There are less than 100 days until the exam, so I hope there are no more disruptions (to the exam preparation) and no more closures of study rooms or hagwon,” he said.

Internet cafes, or PC bang, also reopened Monday, in accordance with the government’s policy, with limits. Food consumption and the entry of minors were banned.

At an internet cafe in the western ward of Mapo, staff members cleared out food shelves as the owner decided to discontinue the business.

An anonymous, mobile chat room that the owner shared was brimming with angry responses from other internet cafe owners to the government’s measures.

“It is really hard to respond to the government’s sudden announcement (about internet cafe operations),” he said. “I am allowed to open around the clock now, but I didn’t have time to hire an overnight worker.”

“I fielded a question to the ward office if it is okay to sell a bottle of water or other drinks, but they said they would get back to me after asking the central government,” he complained.

Gyms and other indoor sports facilities were filled with patrons, who were wearing masks and exercising. Those businesses were also allowed to open again after a two-week closure to tame the outbreak.

Some 20 people were exercising at a fitness center in Songpa Ward. “I feel charged up to workout again after two weeks,” one patron said.

“People must have felt heavy for the past two weeks, since many of them have come to exercise from early in the morning,” one of the gym’s staff members said, adding that the center strictly followed antivirus guidelines.

But some gym owners expressed concerns over uncertainty going forward, as the government’s regulations might change again during the Chuseok holiday early next month.

“I am happy to reopen, but I am not sure how the guidelines might change during the holiday,” one gym owner wrote on an online forum.

“The government warned of a possible shutdown, so some patrons are hesitant to sign up,” another said. “Reopening is still better than total shutdown, but (the uncertainty) is really frustrating.”