Radio
airwaves can provide a refuge where people feel at ease listening to
their favorite music, but they can also carry messages that challenge
the way an audience thinks. KSLG program and music director and DJ
Sabina Gallier aims to do just that. During commercial breaks at the
local radio station, her Black Voices Humboldt PSAs have brought
listeners the emotional stories of anonymous contributors recounting
racist experiences in Humboldt County. 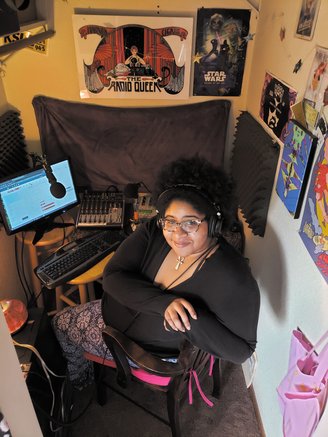 For
the past six years Gallier, has focused solely on indie and
alternative music curation for her shows. But, as the Black Lives
Matter protests continued across the country, she wanted to use her
platform to speak out and show support. As a Black woman with her own
experiences of racism in Humboldt County, Gallier decided to create a
collection of audio stories from Black community members to share on
the radio.

“In
Humboldt County, the Black community is small and their voices are
not heard — they tend to be overshadowed,” Gallier told the
Journal
from her home studio. “With radio, thousands of voices are heard,
people are constantly listening, and turning them into audio stories
makes it more personal.”

Gallier
said the process wasn’t easy. After talking to Lost Coast
Communications General Manager Bill Prescott and getting approval,
Gallier put out the call on social media. Initially, people were
supportive of the idea but there was a lot of hesitancy from
potential participants. Some weren’t ready to share their stories
or found it emotionally difficult. So she assured respondents they
could remain anonymous and their self-made recordings started rolling
in.

Prescott
said that a project like Gallier’s has the ability to continue
increasing awareness, it
showcases
the problems Humboldt County faces and the need to work as a
community to face them.

Gallier
knew the process for this project was going to be tough but
ultimately a good thing for the community. However, listening to some
of the responses and reading the written submissions brought her to
tears, like one
respondent
who wrote, “I recall with clarity being in the first grade on the
playground the first time someone called me the N-word and spit in my
face.” Another tells of being threatened and called slurs, only to
receive no help from police. Yet another shares how she was taunted
by classmates over her hair. Gallier said she needed to take a bit of
a break and step back from the project and ask herself, “Am I ready
to take on this emotional load?”

“I
wanted these stories to really highlight why [the larger community]
needs to start understanding this issue,” Gallier said. “Racism
is still happening and these experiences are extremely valid. We live
in a beautiful, forested area with a cloud of hate over our head.”

Gallier’s
post calling for contributions also created its own ripple effect as
members of the Black community started re-posting and talking about
it, encouraging each other to share their stories.

“It
is good to engage local happenings because it helps reinforce ideals
in how our brain perceives patterns,” said Anthony DeLuca in the
comments to Gallier’s PSA posts. “It warms my heart to see
positive, productive programming.”

Gallier
compiled the responses working from home after having to move her
studio into her closet. She said it was the best spot in her house
with the least noise interruption, so she started putting up
soundproof foam and, when that ran out, folded blankets and nailed
them into the walls. She said it was mentally difficult to get used
to since her work space was now in her bedroom, but she feels
fortunate that she can work at all.

With
all the responses in hand, Gallier split the audio stories and
produced three short pieces in the style of public service
announcements. Two focused on personal experiences with racism in the
county, alternating speakers’ voices in different sections to show
the power of anonymity. For the third piece, Gallier worked with
Sharrone Blanck of the Eureka chapter of the NAACP to create a PSA
dedicated to local resources.

“The
weaving of stories through different voices has a great impact and to
have several voices describe similar experiences is powerful. It was
done beautifully,” said Lorna Bryant, who is Black and the former
office manager and radio host at KHSU. “In a community where you
don’t really see others that look like you, to know that you have
resources, it gives you a greater sense of connection, safety and
comfort.”

To
Gallier’s surprise, the PSAs have received an overwhelmingly
positive reaction from the public, which listened as voices filled
with heartbreak talked about experiences all too many have in
Humboldt County. She said during her time as a radio personality
social justice issues have tended to be brushed off by listeners who
typically
tuned into KSLG for the music. By taking on this kind of community
project, Gallier challenged her audience and potentially reshaped
their reactions.

Bryant
said the community needs more of this, especially from white
residents.

“Don’t
be afraid to damage your white social capital,” she said. “You
may feel discomfort but the moment where you step away from your
privilege outweighs the discomfort you feel for that short time.”

Prescott
hopes listeners will take those steps. “I think in Humboldt County,
people believe in social justice, but don’t know how to approach it
or how to be allies,” he said. “I hope that the people hearing
these will take a moment to look at their own thoughts and biases.”

If
the project is challenging listeners, it first pushed Gallier
herself.

“It
gave me more purpose,” Gallier said. “Off-air, I’m very
outspoken and loud about social issues, and I’ve found that music
and social issues can really go hand in hand, and they’re powerful
together.”

Gallier
said she wants to continue the momentum of the project but isn’t
sure what’s next. The three PSAs are running during commercial
breaks on KSLG but she’s taking some time before tackling more
recordings. But she hopes this conversation continues.

Silvia
Alfonso (she/her) is a freelance reporter from the Bay Area based in
Arcata. The
Community Voices Coalition is a project funded by Humboldt Area
Foundation and Wild Rivers Community Foundation to support local
journalism. This story was produced by the North
Coast Journal
newsroom with full editorial independence and control.