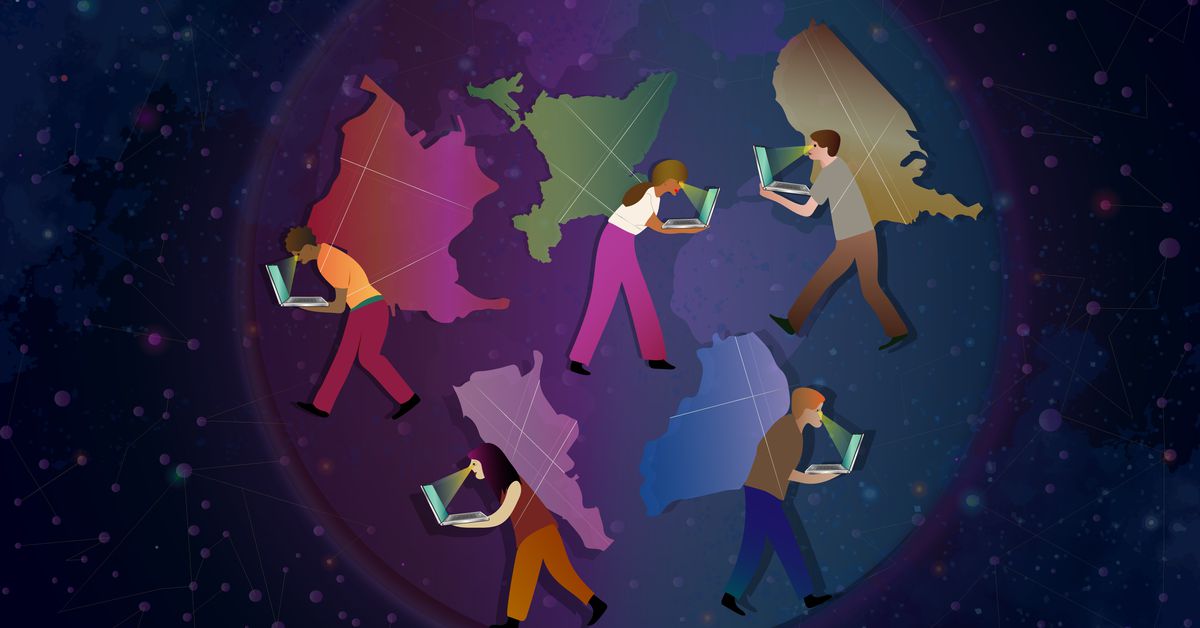 Since Vox Media ordered its workers to stay at home on March 12, I haven’t set foot in an office. I’ve been doing my job as a journalist from home, from the comfort (or, increasingly, back-aching discomfort) of my couch.

This is not unusual. According to the Bureau of Labor Statistics, more than a third of American workers — 35.4 percent — teleworked in May as the country was in full lockdown. The share is lower now as some states have attempted to open up, but the Covid-19 crisis has nonetheless prompted the biggest expansion in telework in American history to date.

Richard Baldwin, an economics professor at the Graduate Institute of International and Development Studies in Geneva and editor-in-chief of the widely read economic research site VoxEU (no relation), thinks this is just the beginning of a massive worldwide shift toward remote offices that span across continents.

In his 2019 book The Globotics Upheaval: Globalization, Robotics, and the Future of Work, Baldwin predicts that “tele-migration” will become a major economic force in the near future as employers in rich Western developed countries begin to export tasks to less expensive workers in the developing world, exploiting technologies like Slack and Zoom. This new wave of globalization will not hit manufacturing work, as the “China shock” of the 1990s and ’00s did, but the services jobs that employ most Americans, including most Americans with college and advanced degrees. This has happened to some degree already with call centers in South and Southeast Asia taking over customer service roles for many companies, but the change Baldwin is envisioning is much broader.

I talked to Baldwin through the relatively primitive technology of cellphones about how tele-migration works, what Covid-19 has taught us about its feasibility, and the opportunity it presents for developed countries. A transcript, edited for length and clarity, follows.

Your book is a forecast for the future, which implies that there are some prerequisites we don’t quite have yet that would enable tele-migration to become a mass phenomenon. What are the big barriers right now? What needs to happen for tele-migration to take off the way you described in the book?

What was needed is what happened in the last six months, which is a coordinated move to remote work. Lots of companies like American Express that I discussed in my book had set up shared service centers in countries like Argentina or Uruguay, where they have talented people for cheap. The British law firms were setting up centers in Kenya. They’ve been trained in the British law system. They’re good lawyers, but cheap by London standards. So that was already happening.

But a big barrier was that there wasn’t this coordinated push to using remote teams. And so there was an inertia in the offices. The real problem was not like tariffs or something; it wasn’t just one thing. It was a whole combination of things. You need to have collaborative software, and your team needs to know how to use it. You have to have connectivity with a laptop and Zoom cameras, reasonably good microphones, a place where you can have an hour-long teleconference without continual video-bombing. And then a place to keep the data secure, to share the documents. You need to make sure everybody knows how that works.

People have been talking about this forever. It was on every corporate to-do list, but it was always for next year. What we did during Covid was overcome that coordination barrier. So now, basically, everybody’s online. There was this forced march through digital transformation, which required a coordinated shift in the way we work, our tools, the way we store our data, the way we collaborate, our expectations, the way the managers know how to manage. All that changed in the last six months.

Also, tons of people have been laid off or moved to part time. There’s a big difference between firing somebody and not rehiring them. Once the connection has been broken, using software automation to replace them, or offshoring, in a situation where lots of companies are going to need to cut costs — they have the perfect excuse.

The last thing about Covid is that it’s changed the ratio of the cost of in-person workers versus software automation or offshore workers. At least for the next couple of years, most corporations will be tight on office space. And so the incentive to offshore now is much stronger than it was before.

Ultimately, none of this technology is new. It all existed. We just had to learn how to use it.

It opens up the labor market to hundreds of millions of very talented people who don’t speak English.

Let me take that abstract level first. The number of people who speak English, if you’re very generous, it’s about a billion people. Let’s say one-eighth of the world population. With machine translation, [speakers of] all the major languages will be speaking quite fluently. So that opens up the talent pool enormously. That’s why I think the tsunami of talent in the 1990s and 2000s that came in unskilled labor in factories is now going to come in skilled and semi-skilled workers in offices.

What you’re describing is in some ways analogous to previous offshoring waves where you’re moving to countries where labor costs are lower. But one complication I can see here is that internet infrastructure, reliable access to broadband, is significantly less reliable and built-out in countries like Kenya or Bangladesh than it would be in developed countries that might be part of this new global labor pool.

What needs to happen for developing countries to make this part of their development path in terms of infrastructure, and making sure that these kinds of tele-migration connections are reliable?

India didn’t use to have good connectivity. The key companies in Bangalore set it up privately, originally with satellite links, not through the government. and they had their own electricity sources to avoid [problems]. So they’re not just waiting for the government. There’s not a port that needs to be built. Internet connections are not that expensive. But you’d want to connect these undersea cables, all that sort of stuff to get connectivity going.

That’s not a new thought in development. UNCTAD (United Nations Conference on Trade and Development) has a whole thing on digital preparedness, and they have a list of what government should do, things like that. But I would suggest that that’s not nearly as big a barrier as it might seem. It pays for itself, and all you have to do is get an internet connection and you can start selling. It’s worth it almost immediately. For me, that’s not a huge priority for governments.

The thing that’s a little bit more subtle is qualifications. So, for example, how do you know what bookkeeping certification in Kenya is equivalent to the US or to the UK? The government can certify workers to make them more attractive and reliable. For, say, certified public accountants, there’s three or four different levels and exams and similar things in many countries, but it’s hard to know what the correspondence is between countries. So allowing that kind of correspondence, I think, would be something governments could do.

But one of the beauties of this for developing countries is that it doesn’t have to be massive. To build a car factory, you need to build the road, the railroad, the ports and airports for exporting. Whereas in Sri Lanka, for example, basically all the techie people are working through Upwork [an online app where people can hire freelancers for specific small tasks]. And that’s completely private sector. It’s one guy at a time getting on Upwork, paying for his subscription or her subscription for a good-enough internet connection. And if enough people buy those internet connections, companies invest to have better ones. So it’s really not as big of a bottleneck as industrial development.

Let’s say you’re a policymaker in a sub-Saharan African country — like Kenyan President Uhuru Kenyatta, for instance — and you’re looking at this as a development path compared to the more traditional export-based manufacturing path that countries like China and India have followed. What’s the case for investing in the infrastructure and coordination to get this going, as opposed to trying to follow the old export-based model?

I have a paper on this with Rikard Forslid. We suggest that the China model based on manufacturing is incredibly hard to do in the first place. There’s only a handful of countries that have actually managed to jump into this export-based manufacturing stuff, and most of them are very close to one of the world’s technological hubs and are part of global value chains.

So what we’re suggesting is that manufacturing development is actually very, very hard because geography really matters. Countries in Africa and South America who aren’t close to Stuttgart, Nagoya, and Detroit really have a hard time joining them. So the China model is really not open for most people.

On the other hand, services are becoming more tradable because of the digital technology. And all the services we talked about aren’t as subject to these agglomeration economies. They don’t need a big push to make everything work.

The word “upheaval” is in your book’s title, and unsurprisingly, a lot of it is about the potential backlash to these major social transformations you’re predicting. That’s particularly interesting to me when there’s this massive backlash against normal immigration in Europe and in the US right now. It seems like tele-migration might allay some of that, but your ultimate conclusion is it does not prevent this kind of political blowup. Why is that?

First of all, the people affected, many of them have had never any globalization exposure. People who will be competing on the basis of wages with foreigners have never had to do that before. So I think the newness of it will seem outrageous. It’s like what happened since the early ’80s with the US car industry. People just couldn’t believe that Japan was producing cars better and cheaper than the United States.

There’s an initial surprise that somebody who thinks $5 an hour is a middle-class living will be competing for your job while living in a different country. They will essentially be coming to work, doing things for your office, be it translation, copy editing, or graphic design. You will realize that they don’t face the same cost of living as in the US or Europe. They’re not unionized, they’re not paying special taxes, things like that. So that will cause backlash.

The second is that something like 80 percent of the entire workforce works in these jobs that were formerly shielded from this kind of competition. So it will be a lot of people. Right now in the United States, factory workers have a way outsize voice, but it’s 8 percent of the workforce. It’s not the same as if 80 percent of the people really start thinking this is a problem. That will have a completely different dimension to it.

Help keep Vox free for all

Millions turn to Vox each month to understand what’s happening in the news, from the coronavirus crisis to a racial reckoning to what is, quite possibly, the most consequential presidential election of our lifetimes. Our mission has never been more vital than it is in this moment: to empower you through understanding. But our distinctive brand of explanatory journalism takes resources. Even when the economy and the news advertising market recovers, your support will be a critical part of sustaining our resource-intensive work. If you have already contributed, thank you. If you haven’t, please consider helping everyone make sense of an increasingly chaotic world: Contribute today from as little as $3.