The absurd tableau of the masked Wicks clutching her blanket-covered infant went viral, earning the freshman lawmaker a flurry of empathetic messages and earning Assembly Speaker Anthony Rendon, a Democrat from Los Angeles, a flurry of scorn. Rendon’s office had denied Wicks’ request to remain at home and vote by proxy, citing concerns over the constitutionality of remote voting and arguing her recent C-section did not qualify her as higher-risk for COVID-19. 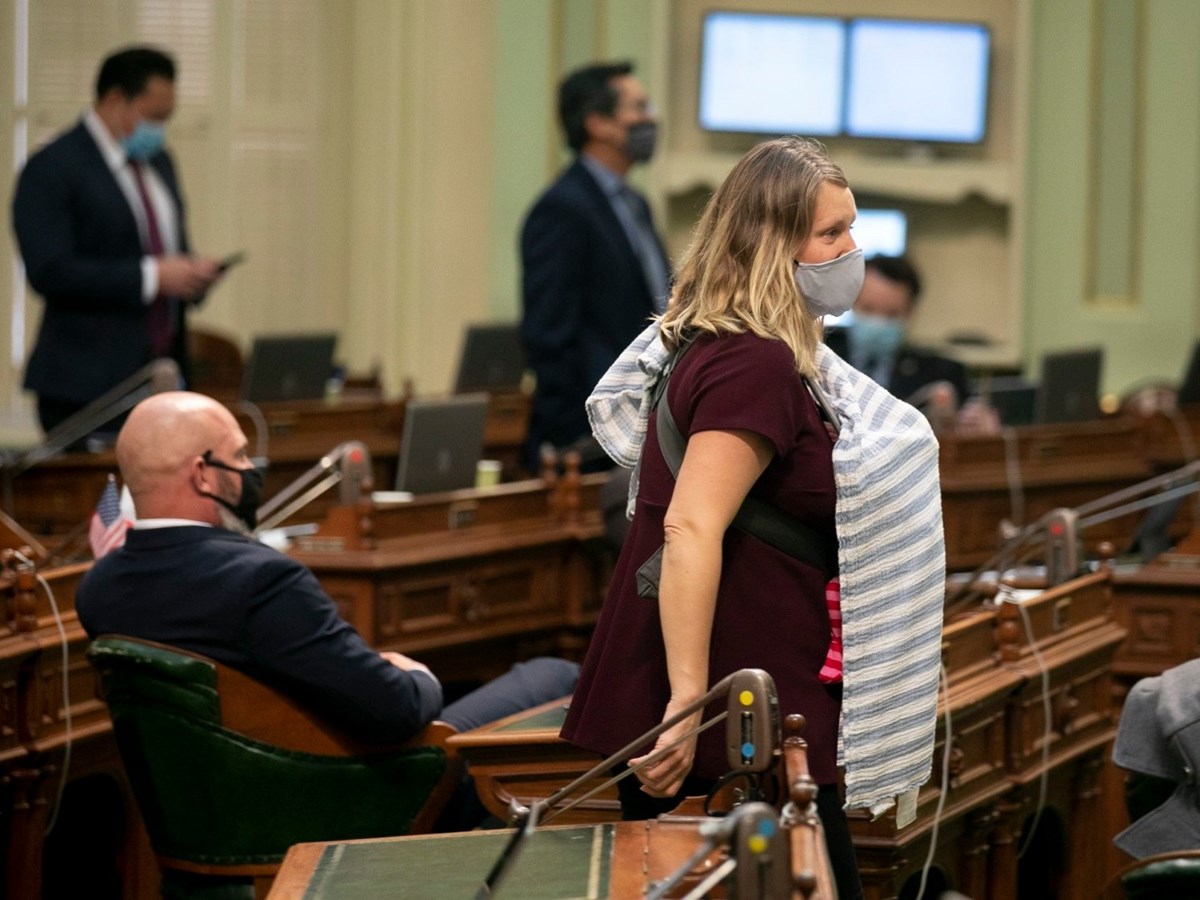 Assemblymember Buffy Wicks walks across the floor during a vote carrying her 1-month-old baby on Aug. 31, 2020. Wicks was not permitted to vote remotely despite having a newborn.Anne Wernikoff / CalMatters

Rendon later apologized to Wicks in a public statement. But for advocates for more housing density across California, compounding the furor with the Speaker over the baby drama was the tragicomic fate of the housing bill for which Wicks so visibly risked her and her child’s health.

The Assembly ultimately passed SB 1120, with 37 Democrats and 7 Republicans supporting the measure. But because the vote happened at 11:56 PM — less than five minutes before a midnight constitutional deadline to send legislation to the governor — the state Senate lacked sufficient time to take one last vote on the measure to approve small amendments made in the lower house. Authored by state Senate leader Toni Atkins, a Democrat from San Diego, the bill would have cleared the upper chamber easily if it had more time to be voted on.

For proponents of more housing production in California, the duplex debacle marked a fitting end to a frustrating year that began with pledges from Gov. Gavin Newsom and leading Democratic lawmakers to make it easier to build new housing. Infighting amongst Democratic lawmakers, exacerbated by the logistical and fiscal complexities of the COVID-19 pandemic, sunk not only the duplex bill but several other pieces of housing production legislation.

Here’s why the “year of housing production” was a dud and what it means for 2021.

There’s a lot of finger pointing among California Democrats about who’s to blame for the failure of the duplex bill. Asked if she believed Rendon deliberately delayed the vote on SB 1120 so that the bill could not become law, Atkins paused.

Friction between the houses is common at the chaotic end of California’s legislative session, as Senate and Assembly leaders jockey to ensure their members’ bills get through the other chamber. But rarely does such friction escalate into public insinuations of sabotage.

Rendon — who voted for SB 1120 — flatly denies he buried the bill for political reasons. He maintains Atkins never communicated to him or his staff the bill was a high priority for her, and expressed frustration that the state Senate was struggling to make its way through a backlog of bills the last day of session.

“The Senate was incredibly slow that day,” said Rendon, referencing the delays caused by remote voting for Republican senators. “It was impossible for us to conduct business with them when they weren’t sending bills across the hall.”

Rendon also said that the duplex bill simply didn’t have enough votes to pass until late into the night,  an assertion both Atkins and Assemblymember Robert Rivas, a Democrat from Hollister, dispute. Rivas was the legislator in charge of rallying other Assembly lawmakers to vote for SB 1120.

“I tend to think of this as a general failure of leadership,” said Louis Mirante, legislative director for California YIMBY (Yes in My Backyard), a pro-density group that backed the duplex bill. “It’s easy for the Legislature to look at the problems of the day and find them more compelling than housing, but housing this year deserved more attention than it got.”

The seeds of discord between Atkins and Rendon were planted by the pandemic, which forced both leaders to hastily reorganize their legislative calendars when the Capitol abruptly shut down in March. The Senate returned a week after the Assembly, which Rendon said contributed to the time crunch at the end of session, which ultimately killed SB 1120.

“We came back a week before them in May,” said Rendon. “When summer vacation happened I was hoping they were going to make up that week by coming back a week earlier than they did. I don’t understand with that sort of time management how we could possibly be blamed for the speed of our work or the way we did our work.”

In May, Atkins unveiled five bills aimed at making it easier to build housing throughout California. Headlined by the duplex proposal, the Senate housing package included legislation aimed at making it easier to convert big-box retail property into housing, allow developers to build more densely if they included more “moderate” income units, and limit the amount of time housing projects could be challenged in court under state environmental law.

None of those bills became law.

“There were house challenges, and you know the overarching NIMBY opposition, and then you had the stop and start of a shortened legislative session overlaying everything, and so it was a recipe for an anemic year for housing,” said Sen. Scott Wiener, a Democrat from San Francisco, whose own piece of the Senate housing package — which would have allowed cities to avoid environmental reviews of smaller housing developments — died in the lower house.

An array of powerful interest groups and political constituencies can be easily provoked to kill a pro-development bill: cities who chafe against the state encroaching on local control over housing decisions; construction workers’ unions who demand additional labor protections accompany changes to the local housing approval process; anti-gentrification groups who fear new development will accelerate displacement of low-income renters; and suburban homeowner associations who loathe the prospect of denser housing arriving next door.

Several high-profile attempts to goad California into denser development have capsized while trying to navigate such treacherous political currents. Which is why the legislative marooning of SB 1120 was so frustrating to its supporters.

The duplex bill would have allowed homeowners to convert their properties into duplexes where that conversion was previously disallowed, or split their lot (if it was big enough) to create a maximum of four units. Demolition of homes which had a renter in them in the previous three years was prohibited, and new units would have to conform to local design standards.

The League of Cities, which represents local governments large and small and has fiercely lobbied against previous density bills, did not challenge SB 1120. Neither did the construction trades’ union or prominent anti-gentrification groups.

But adding to the confusion of what happened to the duplex bill is why Rendon chose to hold a vote on it at all if there wasn’t sufficient time for the Senate to act. The bill was still not an easy vote for many Assembly lawmakers, with several cities and local homeowners associations lobbying fiercely against it.

“When these bills like (SB 1120) say we’re going to just absolutely take away all authority from your community, we’re going to force you to…completely eliminate single-family neighborhoods which are really important to most people,” said Julie Testa, a city councilperson from the Bay Area suburb of Pleasanton. “The people who write these bills are out of touch with our constituents and our communities.”

Testa co-founded an organization called the California Alliance of Local Electeds, in part because she felt the League of Cities was not pushing back strongly enough on new state housing proposals like SB 1120.

Asked if her organization would be targeting lawmakers who voted for the duplex bill, Testa said “targeting” was too strong a word. But she said they certainly would be reminding constituents of how their lawmakers voted.

“We have the ear of the constituents we are directly connected to the homeowners and the residents,” said Testa. “So we do intend to use that strength to create as much awareness as possible.”

After SB 50 — Wiener’s controversial bill to force cities to allow mid-rise apartment buildings near public transit — failed to advance out of the Senate in January, Gov. Gavin Newsom expressed disappointment.

At the time, homelessness and housing were at the top of Newsom’s agenda. The governor had set an audacious goal on the campaign trail of 3.5 million new homes by 2025 — a mark his administration was already missing by hundreds of thousands of units per year.

Then the pandemic hit. While Newsom has reiterated his commitment to housing production, the coronavirus consumed much of his administration’s attention.

Newsom was disappointed none of the Senate housing bills were passed and remains committed to “tackling the affordability crisis head on”, spokesperson Jesse Melgar in a statement.

Just how involved Newsom will be in shepherding housing legislation through the Legislature may go a long way towards determining whether housing politics derail yet another housing package. Newsom’s hands-on advocacy for two high-profile tenant protection bills the past two years helped guarantee both became law.

“I think the governor is trying to balance between people who say ‘you didn’t get involved you should have,’ or ‘you got involved and this is a legislative process,” said Atkins, who reiterated that she believed was able to secure the votes needed for SB 1120 without having to ask Newsom for help. “He’s always having to do that, on a number of issues.”

Wiener, who faces a re-election challenge from even-further-left Jackie Fielder in November, says he plans on bringing back several housing bills he proposed this year. But he stopped short of saying whether he would put forward anything as aggressive as SB 50 again.

“We have not really sat down to figure out exactly what our housing agenda will be for next year,” said Wiener.

Housing production advocates are hoping a slightly less apocalyptic 2021 will yield a more amenable political climate: less friction between legislative leaders, more attention from the Newsom administration, and a renewed emphasis on building more housing as home prices continue to rise and rent declines have been uneven.

But the pandemic has likely taken off the table a key element of past housing packages: money. A massive budget deficit this year derailed hopes for significantly more funding for subsidized housing, and next year’s fiscal picture is unlikely to be very rosy.

“I don’t see the strain on our general fund getting better,” said Rendon.

Rendon, Atkins and Newsom have all publicly stated that housing production and affordability remain a top priority for 2021.

Atkins, while optimistic that meaningful legislation can be passed next year, also cautioned that difficult bills often take years to become law. She referenced a levy on real estate transactions  to finance affordable housing that passed in 2017 after nearly a decade of false starts.

“Sometimes it takes time,” said Atkins. “You know, the sad thing is we don’t have the benefit of time. We needed to have done this a decade ago to address the production issue. But I think we’ve got a good foundation.”