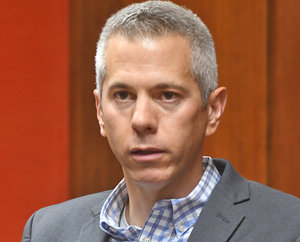 EDITOR’S NOTE — Rep. Anthony J. Brindisi, D-22, Utica, spoke this week with the editorial board of the Daily Sentinel. The topic was primarily the COVID-19 pandemic, but he discussed other issues. The Sentinel is seeking a similar meeting with Brindisi’s Republican opponent in the November election, former Congresswoman Claudia Tenney, who preceded Brindisi in the office.

Here are the highlights of the conversation with Brindisi, edited for brevity.

Q. What should Congress do now regarding the pandemic?

A: We’re definitely not out of the woods yet. Numbers seemed to have subsided here in New York state but I think everyone’s waiting for the other shoe to drop and to see what happens come this fall.

I would say from the federal perspective, businesses still need help. Schools are looking to reopen. People are still out of work ,and we need to pass another economic stimulus at the federal level to be able to address those continued issues that are plaguing the country right now. …

I’m involved in this group, the Problem Solvers Caucus, which is a bipartisan caucus of the House, 25 Democrat and 25 Republicans. We’ve talking about where can Democrats and Republicans agree. Let’s put a framework together to get other rank and file members on board and push leadership to move toward another stimulus package that can be a compromise.

The top priority for me is state and local assistance. That money should be for two very specific areas. One, to cover expenses that state and local governments have incurred as a result of the pandemic, and second to help replace lost revenue that has occurred because of the pandemic. It certainly should not be used to bail out pension systems or prior budget problems that states or local governments may have had. This really needs to be directed toward the needs of the pandemic.

It’s important that we have funding for schools. Schools are seeing a decline in revenue. Their expenses have gone up typically in more rural areas. They’ve had to purchase laptops so kids can distance learn; that’s an added expense. I’d like to see another round of paycheck protection, or PPP, loans in the next stimulus package and some kind of a compromise on unemployment insurance.

Q. Is avoiding bailing out states and localities something to build on?

Absolutely. I think you can get very specific. I think the states should (be told), “Show us your receipts,” just like we do for FEMA (Federal Emergency Management Agency). When states have expenses related to natural disasters they pay for those expenses, and they get reimbursed by the federal government. “Show us what you’ve paid to purchase more PPP or ventilators or other items that were necessary for the pandemic,” and then get reimbursed by the federal government.

One of the challenges with the previous CARES Act in terms of state of local funding was it only went to municipalities that had populations over 500,000 people, and that doesn’t cover any municipality in our district. The next package needs to be targeted toward smaller municipalities.

Q. What should be changed about the paycheck protection program?

There have to be set-asides for smaller community banks and credit unions. There has to be more flexibility in the repayment provisions especially for loans under $150,000, which make up the bulk of the loans that we saw in the 22nd District. And i think we have to continue to be able to respond to the needs of small businesses as long as this public health crisis continues. There are businesses that are going to be able to come back right away. There’s many industries taking a long time to come back — like travel and tourism or the entertainment industry. Those are industries that are going to take a long time to come back and we need to be able to respond to those concerns, because there are lot of jobs there.

Q. How can the federal government help schools?

I would say long-term, we need to learn from this whole thing is that just like we electrified rural American within 10 years during the New Deal, we need the same kind of motivation for rural broadband. e all know this from living in upstate New York: There are people that just don’t have access. In order to work from home and educate your child from home you need to have access to high-speed internet. You got a lot of DFAS (Defense Finance and Accounting Service employees that are asked to work from home during the pandemic; many of them if they don’t have broadband service at home that’s very challenging. The same thing with kids in the school district: if they don’t have reliable internet at home it’s almost impossible to do distance learning.

Q How do we balance stopping COVID and the drawbacks of children not returning to school in person full-time?

I would not want to see a one size fits all mandate on schools across the country. Being a former school board member I’m very supportive of local control. What might be best for Rome may not necessarily be the right thing for a school district out in southern California. We’ve got to be able to look at the numbers here and exercise judgement on what needs to be done based on input from the local community. I was worried that the governor would keep us all in one standard when New York City was really the epicenter of this pandemic, and I’m happy that they looked at regions in the state and opened those regions based on the numbers in those regions. That’s the way it should be done based on science as opposed to one size fits all formula.

I think you need to look at where the kids at the older ages are more susceptible … Maybe just get the younger kids back and spread them out more across the district and utilize any excess space you have.

Q What does the federal government and congress have to look at after the pandemic?

We’ve got to start making things back in this country. A lot of the problems with the shortages with the PPE and ventilators is due to the fact that most of this stuff is made in China. That’s why I introduced the Made in America National Preparedness Act to require the Department of Defense, the CDC and other federal agencies that are responsible to respond to a national emergency to purchase items that are deemed essential in a national emergency, like PPE or medical supplies or pharmaceuticals to purchase them from American companies. It makes us less reliant on an adversary like China during a time of national emergency. And it creates good paying jobs in this country, especially in a place like upstate New York with a proud manufacturing past.

As for debt, one thing I’m very supportive of is pay go, which means you can’t pass an new program unless you find a way to pay for it. That’s something Congress needs to adhere to more. We’re in this national emergency right now and this is the time experts will tell you you have to spend to help stimulate the economy. … When we get past this public health crisis and times improve, we’ve got to focus on bringing down the debt and not mortgaging our children’s futures.

Q. What about from a public health perspective?

A. There have been cuts in research over three years by many administrations where we should be investing in research, NIH (National Institutes of Health) and other agencies to be better prepared for global pandemics. I was at a dairy farm a couple weeks ago over in Cortland County talking about agricultural research and how we fall behind the rest of the world in terms of agricultural research and how important that is to help farmers stay ahead of the game compared to other countries. I think investment and research at the federal level’s a good thing.

The military installations here are in the best position they’ve been in in a number of years. I wanted to be on the armed services committee to ensure that we’d keep the assets we have and we’d grow the mission here in Rome, and if you look at some of the wins that we got in the Defense Authorization Act that just the House, there’s something like an additional $30 million for Rome Lab to be able to put them at the center of quantum technology and research around counter unmanned aerial systems. One of the biggest threats to our warfighters overseas are drones from terrorist groups or countries like Iran or China flying into military bases or ships at sea, and a lot of that research on how to dismantle those devices is done right here, and we need to make sure we invest in that.

Same thing for DFAS (Defense Finance and Accounting Services). I’ve partnered with a colleague of mine who’s on the Armed Services Committee from Maine who has a DFAS site in his district as well. We’re always under threat and we’ve got to constantly be vigilant, but we required a provision that the Army’s got to come to Congress and keep us apprised of any reduction in jobs at either site so we can get ahead of the game.