Jamie Worthy-Smith has seen death up close. She sat bedside when her parents passed away in years past. But while they died peacefully, her sister gasped for air, her lungs gurgling for days before COVID-19 took her last breath on April 18.

“My sister did not go peacefully,” said Worthy-Smith, 53, of Kennedy Township. “My sister suffered.”

Worthy-Smith’s sister, Kim McCoy-Warford, is one of 73 residents who, as of Aug. 25, died of coronavirus at the Brighton Rehabilitation and Wellness Center in Beaver County.

Located 36 miles northwest of Pittsburgh, Brighton has weathered the state’s worst outbreak and one of the nation’s worst with 447 COVID infections among staff and residents.

TribLive published a wide-ranging investigation earlier this month on the conditions at the two-star rated Brighton facility during and before the pandemic. State Attorney General Josh Shapiro later announced his office has launched a criminal investigation into Brighton, and Auditor General Eugene DePasquale shared publicly that the facility refused to cooperate with a financial audit earlier this year.

Brighton officials reported to PublicSource on July 27 that the facility had been COVID-free for more than six weeks.

As public health officials warn of a coming surge of infections in the fall, McCoy-Warford’s story sheds light on some of the hard-won lessons wrought by the outbreaks and on how staffing and supply shortages as well as infection control challenges put nursing home residents at greater risk.

Statewide, residents in long-term care facilities, which include nursing homes, account for roughly 16% of the cases and 68% of the fatalities.

The oldest of four, McCoy-Warford was in many ways a second mom to Worthy-Smith growing up in a single-parent household. But when dementia robbed the elder McCoy sister of her memory, the roles reversed.

Following a seizure in 2013, the former model moved into Brighton when Beaver County still owned the facility, then called Friendship Ridge. With her mental faculties deteriorating, Worthy-Smith became power of attorney for her older sister.

“My sister did not go peacefully. My sister suffered.”

“‘Let me take care of Kim,’” Worthy-Smith said she told their mother. “So many years growing up, she did it for me. And, so now, the little sister has become the big sister.”

McCoy-Warford was 56 when she moved into Brighton, too young – Worthy-Smith said – to have unkempt hair or to be perpetually in a hospital gown. Recognizing the staff’s critical role, Worthy-Smith made it a point to forge relationships with the aides and nurses who cared for her older sister.

And it paid off.

When Worthy-Smith was unable to visit, she said she was comfortable knowing the staff would take care of her sister. The staff, she said, ensured her sister wore a nice sweat suit and one aide would even braid her hair.

“They knew us and we knew them,” Worthy-Smith said.

The sale of the county-owned nursing home to the for-profit corporation Comprehensive Healthcare Management Services LLC in 2014, however, brought unwanted changes from Worthy-Smith’s perspective.

Staffing is universally recognized as the key to quality care. But like with most businesses, staffing is expensive. Certified nurse aides in nursing homes carry much of the direct-care load with residents. They also represent some of the highest turnover rates among nursing home staff.

“The problem with for-profit homes is they don’t have stable workforces and they have high turnover.”

Staffing churn can be particularly pronounced at for-profit homes concerned with profitability.  Historically, nonprofit and government-owned homes have sidestepped this issue because of organizational service missions and the ability to access additional funding streams, such as donations and taxes.

“The problem with for-profit homes is they don’t have stable workforces and they have high turnover,” said Charlene Harrington, University of California, San Francisco professor emeritus of sociology and nursing, who has studied nursing home care issues for decades.

Almost immediately, Worthy-Smith said she noticed under the new management a steady decline in the quality of care. She first observed temporary hires and then, in her sister’s final months, aides with cell phone area codes from Ohio, Tennessee and Kentucky.

“You’d go down there and the people you’d see one month wouldn’t be there the following,” she said. “There was no time to establish relationships with them because it was just a steady revolving door of workers.”

Brighton management declined a PublicSource interview, but provided statements to written questions. In an email to PublicSource, Brighton officials described responding to infection control issues arising from the rapid spread of the virus as “an unprecedented challenge.” 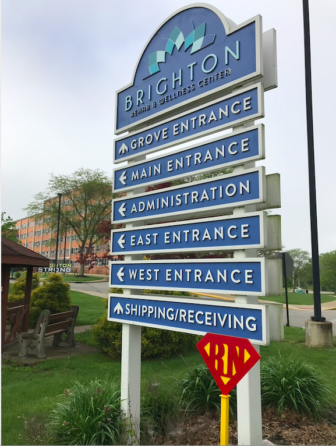 While Brighton management declined to say whether chronic staffing shortages required temporary or contract workers, the Pennsylvania National Guard was deployed to the 589-bed facility on May 11. More than two-dozen state Guard members provided assistance with cleaning, meal prep and activities for daily living such as helping bathe and feed residents – all duties typically done by direct-care staff.

The much-needed help came three weeks too late for McCoy-Warford.

The way Worthy-Smith sees it, employee churn made it impossible for Brighton staff to know her sister’s needs and difficult for her to know how to support those caring for her. Worthy-Smith added, “I didn’t know those people and they didn’t know me.”

While COVID-19 has been the greatest global health care challenge in a century, infectious diseases have always posed a threat to nursing home residents. Infections have been the leading cause of deaths in the nation’s nursing homes – even before the virus struck.

“There is no mystery to infection control,” Brooks said. “Homes that invested in staff and preparedness were able to keep COVID at bay, while homes that put profits over residents saw residents dying by the dozens, and the only thing they could think to do was ask the government to deploy the National Guard.”

Nationally, roughly two out of every three nursing homes have been cited for one or more infection control deficiencies. In the 11 months leading up to the U.S. outbreak, state inspectors cited Brighton for infection control issues at least twice.

“Brighton began preparing for the potential impacts of COVID-19 on our residential care community back in January 2020, and our staff has been working closely with government health officials to eliminate this virus from our facility since March,” Brighton management wrote in a statement.

A turn for the worse

Nearly two weeks after visitors were banned from seeing residents on March 13, Worthy-Smith said Brighton staff called to say they believed her sister had pneumonia. After a short hospital stay, McCoy-Warford returned to Brighton. But staff sent her back to the hospital with a fever accompanied by wheezing.

A federal lawsuit against the Pennsylvania Department of Health, which has since been dropped, alleged that by at least April 10, Brighton was administering a combination of hydroxychloroquine and zinc to all of its residents.

Originally approved to treat malaria, President Donald Trump was an early cheerleader for hydroxychloroquine as a treatment for the coronavirus. The Food and Drug Administration authorized emergency use of the drug on Feb. 4 before revoking it on June 15 because the benefits “no longer outweigh[ed] the known and potential risks.”

Worthy-Smith said staff at Heritage Beaver Hospital informed her McCoy-Warford received hydroxychloroquine while at the hospital.

After being asymptomatic for five days, Brighton staff resolved her sister’s case on April 14. Worthy-Smith thought the worst was behind them.

From the pandemic’s onset, advocates feared long-standing staffing shortages and infection control issues would put nursing home residents at greater risk. The lessons learned will likely be critical for the expected fall surge.

“I think we’ve learned a lot, don’t get me wrong,” said David Hoffman, a former assistant U.S. attorney in the Eastern District of Pennsylvania, and a leader in using federal false claims litigation against nursing homes. “The risk is still high. No matter how much you learn and how you mitigate, that risk remains a challenge.”

“It is asymptomatic individuals, asymptomatic staff, who are courageous and brave to be working in those facilities helping the most vulnerable among us, who unwittingly bring the virus into the facility,” Levine said.

Brighton hasn’t reported a staffing shortage since mid-June, according to federal data.

That’s little consolation, though, for Worthy-Smith and her sisters.

Nicole C. Brambila is the local government reporter for PublicSource. She can be reached at 412-515-0072 or nicole@publicsource.org.

This story was fact-checked by Emily Briselli.