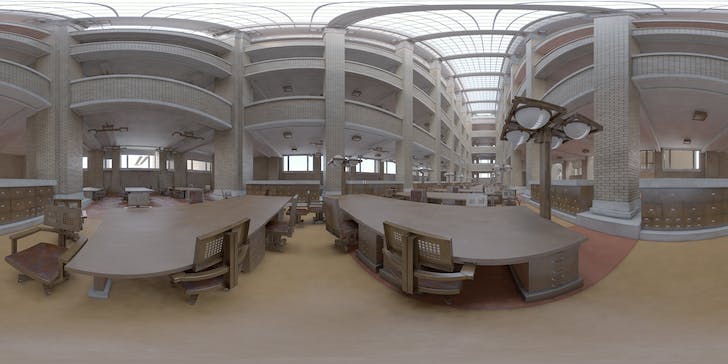 How does COVID-19 fit into the larger history of changes in office design and culture? Shown: Digital reconstruction of the Larkin Administration Building in Buffalo, designed by Frank Lloyd Wright. Photo courtesy of Flickr user Hooked On The Past David Romero

As workers return to their offices after the initial phase of lockdowns that were implemented to stop the spread of Coronavirus, there is a new reckoning in the workplace: Will the open office survive?

An idea that emerged as an innovative model in the 1960’s, the open office concept is an open-plan work environment devoid of enclosed office rooms or walled cubicles for employees that share large spaces and work in close proximity. It was heralded by a new philosophy of work embodied in a shift from worker “productivity” (which emphasized efficiency) to a renewed focus on “creativity and collaboration.”

[The open office] was heralded by a new philosophy of work embodied in a shift from worker “productivity” (which emphasized efficiency) to a renewed focus on “creativity and collaboration.”

But now as tensions inside offices rise, as Sarah Needleman describes in the Wall Street Journal, workers are clashing over masks, cubicles barriers, and Lysol. Needleman describes how workers complain that some colleagues aren’t taking the virus seriously enough, while others express an overreaction by their co-workers. Some don’t hesitate to confront colleagues whose approach they deem unacceptable, while others steer clear of arguments. One can infer from these recent developments that these tensions could persist to a higher degree in the open office, where perceptions of territoriality and infection control have become dire.

The typical office typology was not always open. It emerged through an evolution of organizational culture in the United Kingdom and the United States a century prior to becoming a viable office type. British architect Francis Duffy describes how the primitive models of office expressed a palace-like grandeur and home-like setting, as in the Sun Insurance office, London (1849). In later models, like the Oriel Chambers in Liverpool (1864), the emergence of small suite offices reflected segmental and repetitive work environments. The Larkin building, Buffalo (1904) designed by reputed architect Frank Lloyd Wright, signified extreme efficiency brought about by scientific management. During this time, the Guaranty building in Buffalo (1895) designed by Louis Sullivan signaled the emergence of high rise/high density work setting. In the middle of the century, the Seagram building in New York City (1954), designed by Mies van der Rohe, became the epitome of corporate culture with the consolidation of office spaces brought about in response to the advent of air-conditioning technology.

These changes, in addition to the development of more flexible management styles, then gave rise to early models of open office concept that reduced dividing walls between co-workers and introduced office landscaping, as demonstrated in the Nuroflex office, Nordhorn (1963). During this time, the open office concept also got a boost from Robert Propst, the head of research at Herman Miller, who introduced a new type of office furniture. Known as the “Action Office System,” this model replaced dividing walls by the introduction of innovative fabric and metal barriers that could be used to thread electrical wiring throughout the office area. These barriers then morphed into the now famous “cubicle” that provided workers with individual territorial markers. The open office concept made a comeback in the dotcom revolution of the 1990’s and the demands of the creative class for collaborative spaces that gave  rise to new office typologies such as business incubators (e.g. Y Combinator), start-up accelerators (e.g. Techstars) and  co-working spaces (e.g. WeWork).

Referring to large scale research studies conducted on work environments that include BOSTI, Herzberg and IWSP, environment-behavior researcher Jannetta McCoy, has highlighted attributes that are most important to the occupants of workplaces. These include autonomy and control, level of enclosure, adjacencies, proximity, territoriality, privacy, adaptability, and flexibility. Additionally, thermal comfort, acoustics, air-quality, illumination and access to outside views are also important considerations. Among these attributes, autonomy and interaction are necessary ingredients of an open office. In mapping the possible scenarios of spaces that provide degrees of autonomy and interaction, Francis Duffy outlined four distinct office typologies: hive (a space of low autonomy with work conducted by discrete workers on precise instruction), cell (a space of high autonomy with work conducted by individual knowledge worker), den (a space of high interaction but low autonomy with a group of interdependent people working together) and club (a space for high autonomy and high interaction with work conducted by highly collaborative and individualistic workers). According to this set of definitions, the open office concept can be seen as akin to a “club’ fostering high interaction and autonomy.

As Warren Berger describes in Wired, such a club model garnered tremendous media attention in the revolutionary open office concept introduced in 1992 by Jay Chiat, the former boss of TBWA Chiat/Day advertising agency. In the hopes of transforming the work culture of a creative profession such as advertising, Jay took away employees’ cubicles and desks, equipped them with portable phones and PowerBooks, and turned them into wandering advertising nomads who could perform their tasks wherever they liked. It was similar to the recent concept of “hot-desking” in which workers are not provided assigned or permanent spaces. Aided by Italian architect Gaetano Pesce’s design, Jay Chiat wanted to inspire and creatively challenge his employees, by introducing colorful spaces with experimental furniture, large windows, a coffee bar and lockers. However, after a few years of its operation, the employees revolted against disruption of ownership and routine, and the company dismantled the experiment.

[TBWA Chiat/Day] took away employees’ cubicles and desks, equipped them with portable phones and PowerBooks, and turned them into wandering advertising nomads who could perform their tasks wherever they liked.

Why the open office concept evokes such strong response is better explained through research conducted by Ethan Bernstein and Ben Waber of Harvard Business School, who studied office workers transitioning from cubicles to open offices. The transition gave rise to a surprising result. There was an increase in digital communication among these workers and a dramatic drop in face-to-face interaction by as much as 70%. Ethan theorized that moving to an open public affected the dominant social norms, prompting employees to avoid spontaneous conversations and switch to modes of communication that keep the workplace silent. Similarly, a recent study on the open office in the UK conducted by Alison Hirst and Christina Schwabenland revealed how increased visibility and surveillance of open office concept created gendered spatial power differences. Some women spoke of the anxiety they felt and the restrictions they placed on themselves to avoid being judged by the “male gaze” with the newfound visibility being uncomfortable or oppressive. It was a case of working in a “panopticon,” a concept floated by Jeremy Benthan, an English philosopher in the 18th century, referring to a circular prison with cells arranged around a central well, from which prisoners could at all times be observed. However, the managers of the open office saw it differently. According to them, the design would explicitly remove hierarchical and departmental boundaries and promote ﬂuid, informal networking. Instead of oppressive surveillance, they saw an opportunity to grow into a fulﬁlling new identity as both an individual and member of the collective.

Return of the cubicle

While these mixed feelings persist in the open office concept, the emergence of COVID-19 has created a new reckoning for its viability within the context of new health and safety concerns.  According to Richard Marini of The San Antonio Express, the pandemic will change future office design by bringing back cubicles, new retiring breakrooms, and making cleanliness a priority. Referring to the office spaces occupied by Dado Group architectural firm, he points out to emerging safety practices such as knee-operated utility sink placed outside so workers and visitors can wash their hands before entering the building, a touch-free thermometer to check that workers and visitors are not running a fever, hand sanitizers, and a UV light installed in the duct work to zap any virus or bacteria trying to sneak in. Industry observers also predict an increased use of Plexiglass barriers that act as “sneeze guards” or “cough screens” and rising cubicle heights to stop the virus from spreading easily. Other changes discussed in practice include hand sanitizers built into desks that are positioned at 90-degree angles, air filters that push air down and not up, outdoor gathering spaces to allow collaboration, windows that actually open for freer air flow, quarantine rooms, antimicrobial paint on the walls, and rounded corners in toilet cubicles.

The commercial real estate firm Cushman & Wakefield has developed best practice guidelines for returning to work by introducing the 6 Feet Office, a reference to the current social distance prescribed by the United States Centers for Disease Control to stop the spread of virus. The 6 Feet Office is a conceptual idea consisting of six elements, namely, the 6 feet Quick Scan (an analysis of the current working environment for virus safety), 6 feet Rules (conduct for safety), 6 feet Routing (visually marked and safely designed traffic flows), 6 feet Workstation (an adapted and equipped workplace), 6 feet Facility (a trained employee who ensures optimum and safe facility) and a 6 feet Certificate (a credentialing system that measures a virus-safe working environment).

advancement in technology is augmenting new office types that include remote/virtual office, satellite office, hotelling, and tele-commuting, to name a few.

The remote work environment that came about as the result of the pandemic has also triggered the use of a series of collaborative technological systems such as Zoom, Google Meet, Microsoft Teams, and Slack, which are also expediting the demise of the open office concept.  Erin Vanderhoof from Vanity Fair writes that “A Pandemic won’t kill the Open office, but Slack could,” referring to the popular messaging software. Slack offers Internet Relay Chat style features, including persistent chat rooms organized by topic, private groups, and direct messaging. Zoom is now selling an “all–in-one personal collaboration device” that has multiple cameras that adapt to different rooms. Hence, the advancement in technology is augmenting new office types that include remote/virtual office (offices that only need non-physical presence), satellite office (as an alternative and remote from main office), hotelling, (spaces to work with temporary checkouts) and tele-commuting (which makes virtual, home-office and satellite offices possible), to name a few. In a recent CNBC interview, Taso Du Val, CEO of Toptal, a recruitment agency, observes that in some sectors such as finance and technology, physical space might not even be necessary, particularly as it saves real estate and commute time.

In summary, the doors seem to be rapidly closing on the open office concept, at least temporarily. The psychological concerns of ownership and privacy, the health concerns of the pandemic, the technological advances for remote collaboration, all seems to be creating a critical mass that is stacking against it and expediting its demise. However, if history were a guide, as we have seen in the various examples, the open office concept has ebbed and flowed in phases, enticed by its liberating work culture. There is a reason to believe that it could make another resurgence, after workers have first gone past the bad news of the pandemic that hits the TV screens on a daily basis, for example, or if a visible improvement in health and safety among the general population materializes. It could also return, in the longer term, and this is a more difficult thing to overcome, if people can get over the psychological barrier created by the pandemic enough to feel safe once again in social and office settings.