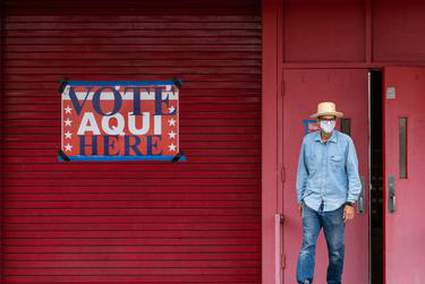 A man exits Toney Burger Activity Center and Stadium in South Austin during early voting for the primary runoffs. Credit: Jordan Vonderhaar for the Texas Tribune

The Texas ballots are set. The Democratic and Republican conventions are complete. But the issues that will drive some of our decisions won’t gel for another few weeks.

What we’re likely to be talking about when we vote hasn’t happened yet.

Some of us, anyway. According to polling in Texas and elsewhere, most of us have made up our minds about the Nov. 3 general election — at least in the race for president. Republicans like Donald Trump a lot, for instance; in a recent University of Texas/Texas Politics Project survey, 91% of self-identified Republican voters said they’ll vote for the incumbent. Conversely, 93% of the Democrats in that survey will cast their votes for Joe Biden.

Ignore the nuances for a moment: The candidates will be locking down their base voters and getting them to the polls, and fighting over the independents who, in close elections, will decide the winners.

Texas, according to that and other recent polls, could be a close state. The June survey had the president 4 percentage points ahead of his challenger — outside the margin of error, but not far enough ahead to ignore the looming troublemaker in the rearview mirror.

The conventions were there to lock down the bases. For the Democrats, that meant tearing into the Trump administration, fondly recalling the eight years Barack Obama was president and building up Biden’s bona fides. For the Republicans, it meant humanizing their rough-edged incumbent, ripping Biden’s performance during four decades in public office, and hyping the violence of widespread demonstrations against racial injustice and police violence to argue for law and order and support for law enforcement.

But during the week of the GOP convention, Jacob Blake, a Black man, was shot seven times in the back by a police officer who was trying to pull him back from a car in Kenosha, Wisconsin. During demonstrations that followed, two people were killed and another was injured, allegedly by a 17-year-old who took a rifle to the Blake protests.

After a summer of protests spurred by the killing of George Floyd in Minneapolis police custody, the two shootings in Kenosha reignited the debate. Republicans found new traction for their law-and-order appeal. Democrats, bolstered by striking professional athletes, renewed calls for police reform and racial justice.

That’s still being sorted, but the political stakes are higher than before, with an election two months away. What will those independents do? Will new voters show up as a result, and for which side? Will regular voters decide to stay home?

And that might not be the biggest unanswered question. Speaking Thursday on KTRK-TV in Houston, Gov. Greg Abbott was asked about the generally positive COVID-19 trends of the last few weeks.

“We have three things to get past,” he said. “One is the hurricane, two is the opening of schools and three is Labor Day. If we can continue the downtrends through those three different challenges we’re dealing with right now, then we will be taking a look at further openings in the state of Texas.”

He didn’t mention what voters would be doing. Public schools could be a major factor in how people are thinking about government responses to the pandemic. It’s almost a referendum. If the kids are healthy and in school and moving in the general direction of normal life, that could be good for incumbents. Otherwise, not.

Abbott’s other point — business closings amid a recession — goes in the mix, too. Many businesses have already failed. Many more can’t keep their doors closed for much longer and have any hope of returning to business as usual. It’s easy enough to see what Texans are feeling now, but the polls aren’t open now.

All of these issues matter, in practical terms, just as they have for months. But all of them are changing at the same time we’re entering the final leg of this election cycle. The evidence is out. The public is paying attention to police shootings and race, but attention isn’t action. The schools are just now opening, a giant experiment in education and public health. Labor Day is in front of us. Hurricane season isn’t over. The economy is stuck in recession.

As we approach the election, it’s still hard to say what we will be thinking when we cast our votes — and which candidates might benefit.

Disclosure: The University of Texas at Austin has been a financial supporter of The Texas Tribune, a nonprofit, nonpartisan news organization that is funded in part by donations from members, foundations and corporate sponsors. Financial supporters play no role in the Tribune’s journalism. Find a complete list of them here.